This series of projects is about awareness. It is about the tools and techniques we use to see the world around us.

These projects were part of an ongoing process of investigation during my last year as a Parson's MFA DT student and they are presented as three explorations around the theme of skylines.

We look at the horizon and see a skyline, the place where the earth and sky touch. This contour is the confluence of time and space. The landscape is in constant change and fluctuation; it is shaped over time by forces like erosion and human desire. This skyline is also defined by the particular position of the observer - seeing through technical devices allows us to look beyond our perception into different qualities of time and space.

These three pieces required the construction of special tools. Some physical (like the vPlotter) and some virtual (like the drivers for the Thermal Printer and Google Street View Data Scrapers).

Landscapes, as a pictorial theme in art, speak overall about our intention to capture the world we live in. Landscapes preserve for the future a glimpse of our context, the background of our experiences, the identity of a nation, the horizon of an era.

As Rafael Cardoso said "nature is not made up of landscapes. Although it contains mountains, valleys, plains, rivers, bays and much more, these natural forms only become 'landscape' when they are framed by the viewer's gaze and grouped into compositions. The landscape thus depends on the observer's gaze just as much as on the actual physical features been observer." As another example, The Hudson River School, with its panoramic vistas, deep space, deft atmospheric effect and precise details define the national identity of North America scenery.

By learning to draw these sceneries, artists through time understand the laws of our perception: everything from the behavior of light to the laws of perspective were discovered by learning how to see the world. In that process we develop tools, like the camera obscura, camera lucida and lens techniques, that helps us see with more precision. Artifacts were designed to assist our perception. With them our awareness of the world has expanded dramatically. We learn how to see further and closer, to get a better picture of the macro context we are inserted into, together with the micro universe hided in details.

Because of the scale of our world, observation of space has always relied on technology. This forced us to develop and improve technology that helps us see where our eyes are blind -pushing the limits of our perception. Binoculars, telescopes, astrolabes, compasses, grids, maps, photographs and panoramic images are just some of the devices we create in this process of always looking further. 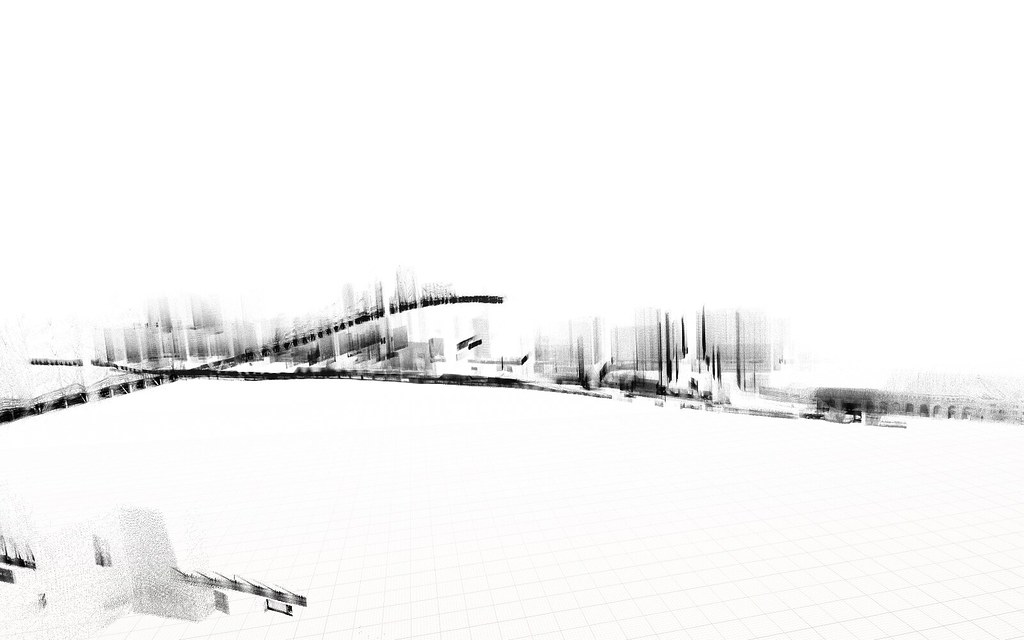 Nowadays we live in a world of images. They are easy to generate, edit and share. Effortlessly and instantaneously we produce an enormous amount of information about the world like never before in history. 3D Maps, a digital compass, GPS devices, and panoramic cameras live in a same device in our pocket. But does this mean we are more aware of our surroundings than ever before?

This thesis is a meditation about these devices. An on-going process of exploration around the theme of seeing assisted by apparatus.

The Artist as Toolmaker

Artists have been on the technological frontier since before the Renaissance. As Greg Turner and Ernest Edmonds said, "the physical world of artifacts is very different from the conceptual world of the imagination, and artists often find themselves pushing technology forward, creating new artifacts either as part of, or in order to construct, their art. These new artifacts present new ways of using and thinking about other things.” @Art03towardsa

Most of these artifacts, developed by the creative process, end up as custom tools for expression. Some of them have become so popular that it is impossible not to relate them to a particular expressive field: the brush for painting, the chisel for sculpture, the notebook for poetry. Tools blend with the author to become extensions of their body and share the process of bringing imaginations to life. This can happen by learning how to use pre-existing tools, by experimenting with using tools in new ways, or by developing new tools. In the new media scene, the latter two occur often.

"As long as you are not defined by software, you are helping to broaden the identity of the ideas that will get locked in for future generations." Lanier, 2010

Three decades after Xerox/Park research and the birth of the personal computer, digital media has become part of our time. Computers were developed as information machines in the early stages of what was called Information Society (Beniger & Salvaggio). We have "come to be viewed as an active processor of information." The tools designed for this duty are the standard digital devices that we find in offices and homes, desktop computers, printers and scanners. All of these respond to standards becoming black boxes of Inputs/Outputs.

What was initially a tool for data processing slowly transformed into an expressive medium chosen by some experimental artists. As John Maeda once stated, computer technology “is not a tool; it is a new material for expression.” New media artists in their search for new expressive and poetic potential make constant efforts to re-appropriate existing technology and at the same time push the limits of it into new directions.

This breaks with the passive paradigm of computer "users" to install an active attitude of creators. As Mitchel Resnick said, “computers will not live up to their potential until we start to think of them less like televisions and more like paint brushes. That is, we need to start seeing computers not simply as information machines, but also as a new medium for creative design and expression.". Resnick emphasizes the need for turning the Information Society into a Creative Society. “The ultimate goal is a society of creative individuals who are constantly inventing new possibilities for themselves and their communities."

In this spirit of self-made tools, I began a series of explorations searching for new poetic potential in between old and new apparatuses, and digital and analog media. 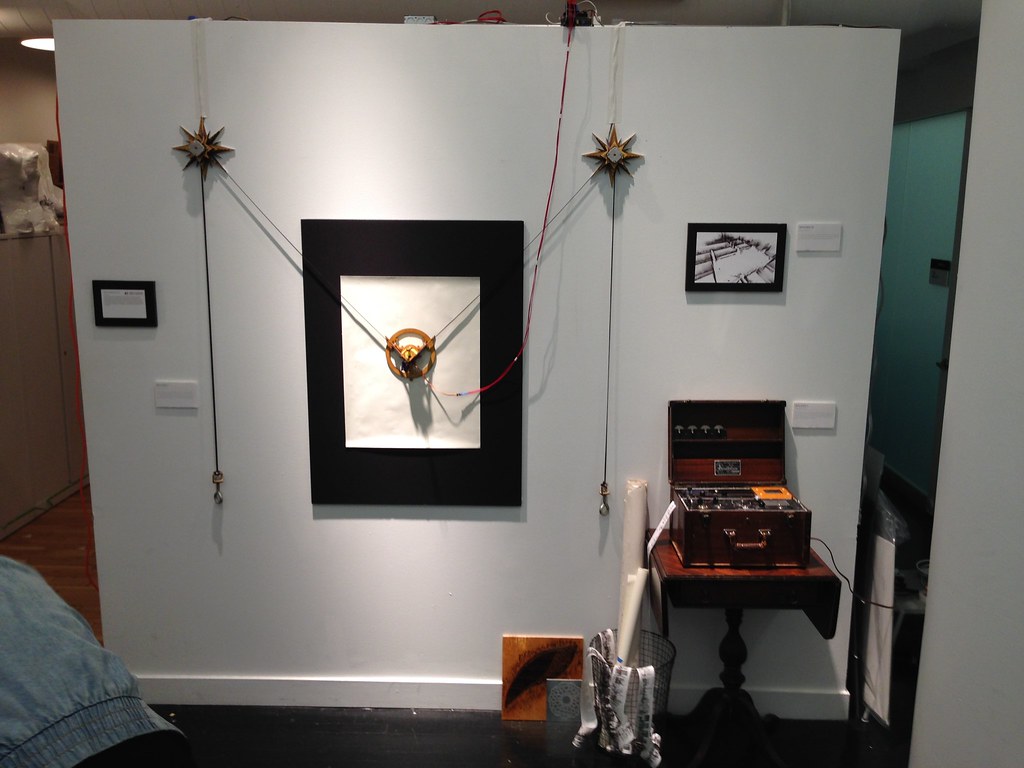 One of my biggest inspirations for these explorations was William Kentridge, a famous artist who is not usually considered a new media artist, though in his work he uses a camera and a projector to construct animations. Sometimes he starts by filming himself performing different movements. Then, after editing the video, he projects it on top of a board and uses pieces of paper to animate frame by frame. In this process he is not only incorporating both digital and analog materials, he is sitting in the middle of a bigger apparatus. His studio becomes a tool in itself, and him a user and a vital part of it. This represents for me an excellent example of de-centralization of technology. In it, devices are reduced to a mere set of input and output devices that become part of a creative process that incorporates expressive potential from both worlds. This exquisite model of working teaches us about a flexible flow between "real" and "virtual" media, one where the artist can initialize an expansive dialog that integrates together analog and digital gestures.

As Klemmer and Hartmann warn us, "one of the most sweeping — and unintended — transformations that the desktop computing paradigm has brought about is the extent to which the physical performance of work has homogenized." The expressive potential of our bodies is restrained by the same gestures we use for navigating the web and writing an e-mail. In order to explore new frontiers, we need to integrate the body in new ways by modifying and re-appropriating the available technology.

Michael Polanyi refers to our physical body as "the ultimate instrument of all our external knowledge, whether intellectual or practical experience is always in terms of the world to which we are attending from our body." In this sense, digital creative processes that successfully incorporate the richness and rawness of direct manipulation of materials will result in a larger bandwidth of poetic and expressive potential.

Inspired by William Kentridge’s methodology, I dedicated the fall of 2013 to explore the boundaries between digital and physical tools. I developed a wall plotter (vPlotter) that later become a tool to think about technology and perception.